No products in the cart.

Home Blog Here’s Why You Should Drink Black Tea

Here’s Why You Should Drink Black Tea

Many studies, blogs, and fitness enthusiasts have widely projected the benefits of drinking green tea. It’s a huge point of conversation within the health industry, at least within the United States. But, in many other areas of the world, including Europe and the Middle East, there is also a great deal of stir around black tea. Far fewer studies have dug in to all of the benefits that black tea has to offer, but maybe it’s time to take a look and assess the lesser known of the two options.

Black tea is originally made from the same leaves as green tea, however the leaves are further dried, which changes the color and taste of the tea altogether. After the leaves are dried, the tea processing involves full oxidation and fermentation. This is the reason the black tea leaves turn black and take on their strong, trademark flavor.  Once the aroma and flavor fully develops, the oxidation process is stopped and the tea leaves are crushed into various sizes. 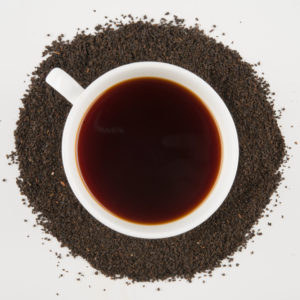 Aside from being an enjoyable and tasty drink, black tea comes with a host of health benefits. Here are a few examples.

Drinking black tea helps to prevent the blocking of arteries and can thus help to reverse poor arterial functionality that may lead to ailments such as heart attacks and strokes. In a recent study, Dr. Joseph Vita (of Boston University’s School of Medicine) had heart patients drink 4 cups of black tea daily, as a basis for comparison against a placebo group which drank plain water during the same time frame. Over the course of one month, the impaired function of blood vessels in the black tea drinking group improved over 50%, whereas the placebo group realized no significant improvements.

It May Prevent Cancer Growth and Inflammation

Tea has long been correlated to a lower risk of stomach, colon, and breast cancer, and this correlation has been closely studied in many laboratories across the world. At Rutgers University, researchers have shown that a compound found in black tea known as TF-2 caused colorectal cancer cells to “commit suicide” while normal cells remained unaffected. This TF-2 compound has also been shown to suppress the Cox-2 gene (which triggers inflammation).

It Can Eliminate Viruses

Studies have shown that black tea can help to neutralize germs, including those germs which cause pneumonia, cystitis, and a host of different skin infections. Research conducted by Milton Schiffenbauer of Pace University has even found that black tea can “deactivate” viruses upon consumption.

To get the most out of your tea consumption, be sure to drink both green tea and black tea so that you can realize both of their benefits! Whether you drink your tea out of the bag or buy the leaves at the grocery store, a cup or to a day will make sure that you are tea-ing (I’m so punny) yourself up for a more healthy you!